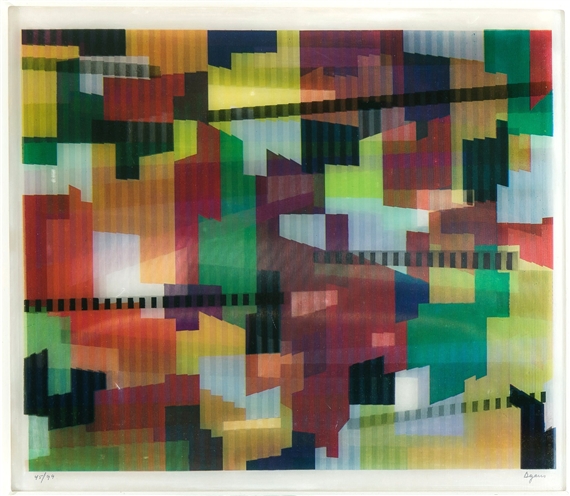 Yaacov Agam, price on request
Yaacov Agam is an Israeli artist best known for his pioneering Kinetic Art and association with the Op Art movement. Born Yaacov Gipstein on May 11, 1928 in Rish-le-Zion, Palestine (now Israel), Agam studied in Jerusalem, Zürich, and Paris. While attending Zürich’s Kunstgewerbe Schule, the sculptor, painter, and printmaker was taught by renowned color theorist Johannes Itten before moving to Paris, France in 1951, where he currently lives and works. Agam’s abstract style is a mix of formalism and mysticism, borrowing from the Kabbalah and employing an energetic dynamism by way of illusory optics. His is known for his lenticular prints, or Agamographs, where images appear to change depending on where the viewer is standing, while his kinetic sculptures have been part of public installations, inviting audience interaction. Agam has been the subject of retrospectives at the Musée National d’Art Moderne in Paris in 1972, and with the Solomon R. Guggenheim Museum in New York in 1980.